Yesterday, we started the process of sending Kananelo, Retselisitsoe, Lerato, and Thoriso back to their families. It is sad to think about the safe-house without the “Fab Four”, but they are all in stable health conditions and have all started walking, so the timing is right for reintegration. The process will last about a month, during which time they will continue living at the safehome, but outreach workers will be actively working with their families. The first step is to take the “Fab Four” to visit their families, set some expectations, and agree on a timeline.

I went along with ‘M’e Mamareka to begin the reintegration process for Kananelo. She has been at the safe-home since she was just three-weeks old, arriving shortly after her mother passed away from HIV/AIDS. Her father is still alive, and the goal was to find him and develop a plan for how he – or the extended family – could provide care for Kananelo.

We drove for an hour and a half to Kananelo’s village in the Molikaliko area. As we stepped out of the car, two women rushed towards the car and called out “Kananelo!” ‘M’e Mamareka quickly handed over the star attraction, and much to our surprise, the usually skittish Kananelo went quietly into the outstretched arms. Mamareka and I then went into the family’s rondavel to speak with the father, who climbed down from the neighbor’s roof he was repairing when he saw us arrive. 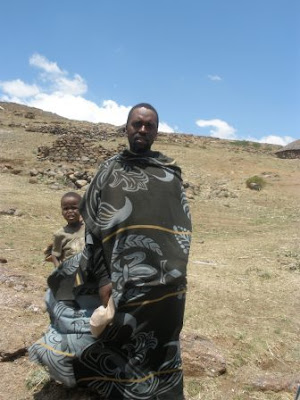 Scarcely older than I am (maybe 30?), the father’s overwhelmed look was clearly that of a widowed man, raising 6 kids on his own, being asked to take responsibility for a seventh child – a one-year old baby girl who still requires diaper changes, spoon-feeding, and near constant attention. His eyes, when not pointed at the ground, registered fear, and he sighed quietly as he listened.

‘M’e Mamareka made quick work of explaining the situation – Kananelo is ready to come home – but the father seemed reluctant. “There is no food,” he explained. A small child came into the rondavel, leaned into his father’s ear to ask a question, and then quickly disappeared. Plus, the father elaborated, he has to work all day just to scrape by now, and would have no time to care for a one-year old.

Now it was Mamareka’s turn to sigh. “This is not good,” she explained. “He says he cannot take care of her.”

A family meeting was quickly organized. With little fanfare, children outside the rondavel were told to go fetch an assortment of relatives from around the village. Within ten minutes, there were eight adults crouched on the floor of the hut – five women, and three men.

Mamareka explained the situation again for the larger audience. The family discussed. It occurred to me that this situation would be repeated anywhere in the world under similar conditions: a woman dies and leaves her infant child; a family or community gathers to weigh their options; a decision is made.

“The aunt will take her,” Mamareka announced to me. 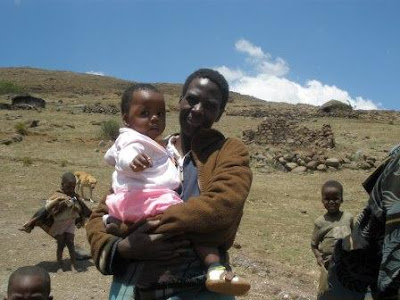 Kanenelo’s situation is not ideal. The aunt who agreed to take her works part of each year in South Africa – as do many Basotho – and Kananelo will have to travel with her. But the family stepped up, and at least Kananelo will have a home and a caring relative to look after her.

As we stood up to leave, Kananelo’s new “mother” started to hand her back to us. Kananelo – who exchanged arms silently just an hour before –cried as Mamareka took her back.