Last Wednesday was Reid’s first excursion as “driver” for TTL outreach. Says something about trust in male ability, since everyone seemed fairly unconcerned about the fact that Reid had never driven a vehicle on the opposite side of the road and in some of the most intense driving conditions you could imagine. I figured that I would go along and see how it went, perhaps shouting “stay on the left!” every so often to keep things running smoothly.

Outreach went well, and Reid did a commendable job driving on all of the “roads” leading to our clients. 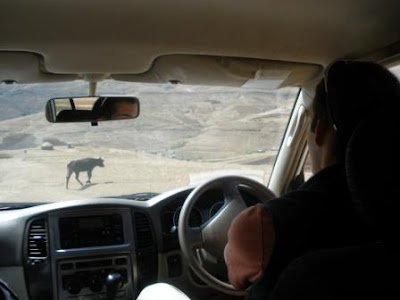 At one point, driving straight up a mountain over what could only be described as rocky conditions, we looked up at our destination—a small village perched atop a windy hill—and then down to the seemingly empty valley below. Kokonyana – –the brave outreach worker accompanying us on this day – laughed, “yes, we always wonder why they build their homes so high!” Indeed.

Our first stop was to check up on a former safehouse resident who had been reunified with her aunt last month. We brought food, which TTL provides for both the child and as a supplement for their family, and weighed Reabetsoe. Unfortunately, she is not thriving as much as we would want, and frustratingly, she has been given two DNA-PCR tests for HIV, and both times the results have been lost by the hospital. TTL is going to try to set up a third testing when the Baylor doctors are next in Mokhotlong.

Next we headed to see Ntsetiseng, a child born to one of the mothers in the PMTCT (prevention of mother to child transmission) program. He looked chubby and healthy compared to Reabetsoe, though his mother reported that he had recently been ill. Ntsetiseng has been weaned for two months, and on formula provided by TTL, so we are hopeful that he will prove to be HIV-negative. The most jarring image of the day appeared as Ntsetiseng’s mother asked us to go see his father, recently returned from the hospital where he was started on TB and ARV treatment. The man lying on the mat in the smoky rondavel appeared so wasted and weak that he could barely acknowledge our entrance into the room. I felt strangely desensitized to the picture before us, because it did seem so much like a “picture”, the representation you have seen in books and newspapers of the typical TB or HIV patient. It seems unreal that an actual human being could degenerate into that state, that a being right in front of our eyes could look like that, and still maintain some spark of life despite his cadaverous appearance.

Claire, a med student from Tulane, was with us, and it was striking to have her input as someone who has recently been acquainted with American medical practices (as Reid and I are obviously far from medical experts). She was shocked by how a TB patient could be kept in a small room also occupied by the rest of his family, going about their daily lives, eating and sleeping. She described the intense precautions taken in American hospitals around TB patients, the immediate quarantine and use of masks and gloves. It does appear as a strikingly uphill battle if this man is being treated, only to eventually infect the rest of his family. These issues are somewhat outside the purview of TTL, but at the same time have a very direct effect on the lives of the babies we treat.

The third client we visited was a six-year old girl, Keketso, who should be starting ART. It is unusual for an HIV-infected child to remain healthy and undiagnosed for so long (I believe that around 80% of infants infected with the disease die before age five), but Keketso appeared healthy and well-developed. 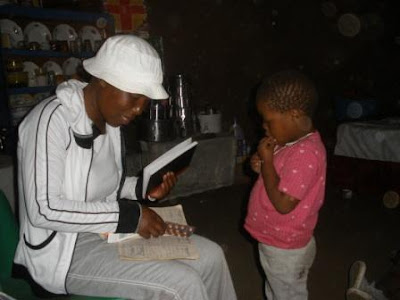 The difficulty is in arranging transport from her village to Mokhotlong, since her local clinic has not begun providing ARVs. TTL told her grandmother that she would be reimbursed if she brought Keketso to Mokhotlong, but for some reason she seems reluctant to do so. We will be checking back in a few weeks.

At this point, we felt that we had had a good, full day of work, and returned to the safe house to eat lunch and tie up a few odds and ends in the office. Instead, Nthabaleng came out to meet our returning car, informing us that the outreach worker and driver in Thaba-Tseka (the neighboring district where TTL has a satellite outreach office) had run out of gas and were completely stranded, as apparently there was no gas to be had in all of Thaba-Tseka. She told Reid to eat lunch quickly, as he was going to have to perform a rescue mission and drive to Thaba-Tseka with containers of diesel, which would take about 6 hours round trip on gravel roads. Kokonyana would come to give directions (and perhaps to act as safeguard of the Land Cruiser), and I decided to tag along for moral support.

We filled plastic drums with diesel in town, strapped them to the top of the car, and headed into the mountains. I think I am adjusting to the roads, as they seem less terrifying than they did our first week. About an hour into the trip, Kokonyana thought we should check to make sure the gas containers were ok. We hopped out of the car, buffeted by strong winds on the hilltop, and, sure enough, they had both fallen over on their sides, slowly leaking. The only thing worse than driving 6 hours to deliver gas is driving 6 hours to deliver empty containers, so we tried various methods of tying the containers, to no avail. At this point, Kokonyana sighed. “Ah,” she said, “today is today.” Maybe because we were in the mood for profundity, Reid and I immediately took up the refrain. So true, today IS today. It’s a useful phrase, summing up both the negative attitude of, “it figures!” with the philosophic outlook that, even if today is downright terrible, it is only today. Tomorrow may be an entirely different experience.

Anyway, muttering “today is today” under our breath, the three of us managed to wrangle the containers into the back of the car and strap them securely to the trunk. The next two hours were fairly pungent, but with the windows of the Land Cruiser rolled down and striking mountain vistas all around, not so bad. 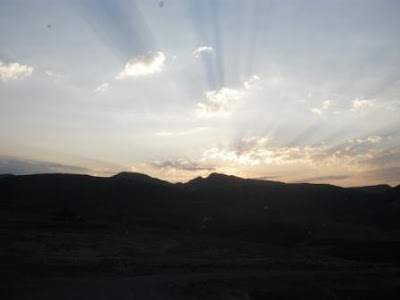 The return trip, in the pitch dark on winding, rocky roads, was exhausting but uneventful, and Reid quite proved himself as a driver. As we pulled back into the TTL, about 12 hours after we set out that morning, I realized, the first step in considering a place home is when, upon returning to it, you feel nothing but grateful relief.