We are back in Mokhotlong after a great couple of weeks in the United States and are quickly readjusting to life in Mokhotlong, happy to see all those familiar sights that make you feel home in rural Lesotho. A man chasing his sheep from the road. Houses constructed of mud. A three-year old boy pulling a 800 pound donkey. And yes, worms in our thatch roof. 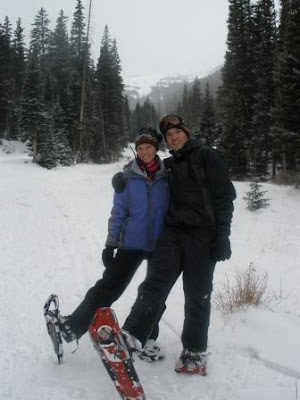 Bridget and me snowshoeing with the Harringtons in Colorado.

Most exciting, of course, the safehouse is jumping with energy and all of the babies are smiling and playful. Two babies arrived while we were away, and there are currently ten kids in the house. Teboho, one of our 4 month old friends, just took a nap on my shoulder. It is nice to be back.

It is also amazing what three weeks can do for a child. A few of the kids who were really sick when we left have turned the corner and are now playful little toddlers. Of particular note is Semete, a little boy who three weeks ago was painfully shy, and probably even more painfully malnourished. Now you can’t slow him down. We brought a soccer ball back for the kids, and he has quickly appropriated it as his own. Now if we can just get him to kick it instead of sitting on it… 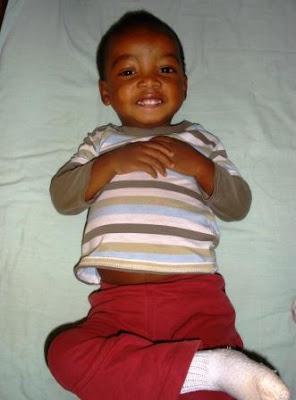 Semete lounging in the playroom.

We are going to be writing as much as possible for the remainder of our year here. Thanks so much for following along, and for all of your kind words and support. It was great to see many of you. Happy New Year!