This weekend we went on a little adventure to Durban, South Africa. Jamie served as our intrepid guide, having made the trip from Mokhotlong several times before. From our estimation, Durban is about 150 miles away (keep this in mind as lengths of trips are discussed below…). To keep things interesting (and out of sheer necessity), we decided to travel the 150 miles on “combis,” public transportation vans that make up most of the long distance transport in Lesotho and South Africa. These combis, about the size of a US minivan, are supposed to carry 15 passengers—three in the front row, three in the three middle rows, and four in the back. In the interest of cramming in passengers, they have no trunk or storage space. This, you might imagine, makes for pretty crowded conditions. To start out the first leg of our trip, from Mokhotlong to the South African border, 16 people piled in the combi. We squeezed in the back row, sure that we were at the absolute maximum capacity. But no…about an hour into the trip two shepherds dashed at our combi as we crossed over the mountain passes, climbed in on top of everyone, and we went merrily on our way. To give you a little taste of the experience (turn up computer to full volume to fully appreciate the Basotho music! Got to love the inspired mix of accordions and thumping bass):

Overall, though, the combi rides went smoothly, and three transfers and nine hours later we arrived in Durban. We hopped out in the middle of the bustling city center and caught a cab to our hostel in a more residential area of town. After a quick freshening up, we headed out, only to find ourselves in an empty Indian restaurant at 6:00pm. Not very cool of us, but the experience of eating delicious food at a real restaurant (albeit an empty one) was completely worth it. From there we headed to a club—also very far from the Mokhotlong scene. I think we even lasted several hours past our normal bedtime. 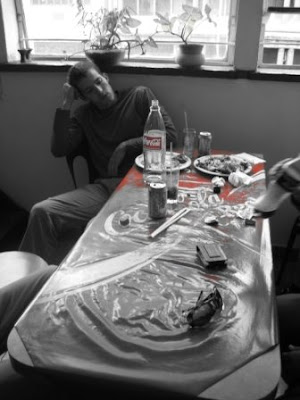 Saturday we headed first thing in the morning to Victoria St. Market—a bustling covered market that sells both Indian and Zulu spices and crafts (Durban has a huge Indian population). Ellen and I had a great time buying fancy curry powders and cool crafts, while the guys drifted around. Being surrounded by the bustle and noise of a big city felt good—until we witnessed a violent beating of two boys who apparently tried to steal something from one of the vendors. We stood there stunned, while a man kicked one of the boys to the ground. Without understanding anything that was being said, or the reactions of the crowd, the experience felt even more disturbing and threatening. It was a stark reminder that the city’s bustle also contains an undercurrent of violence and instability.

For the rest of the afternoon we continued to wander around the city—still appreciating its vibrancy. I led the whole group on a fruitless search for a bookshop, but on the way we stumbled upon a variety of interesting markets where Jamie and Will could search for the perfect soccer jersey.

We had another leisurely dinner—Italian this time – and then headed to a bar at which we were quite possibly the oldest patrons, but which provided excellent people watching of college aged Durbanites and study abroad kids. 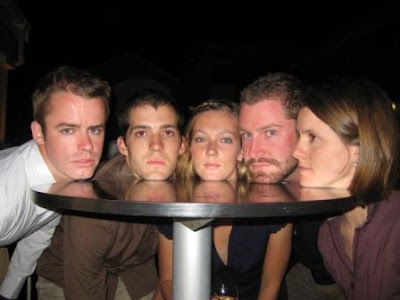 The next day we finally found a bookstore (relief!), then walked down to the beach. The weekend’s weather was disappointingly drizzly and windy, but just the experience of the ocean and beach was wonderful and so far off our mountainous existence. 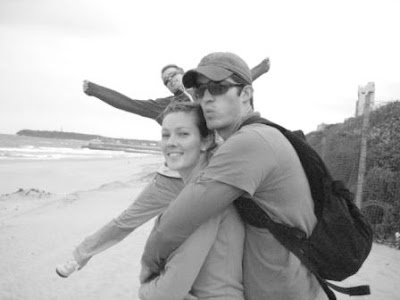 At around 5 we ended up at uShaka Marine World, one of the largest aquariums in the world, and, as we could get in half price because of the late hour, decided to go for it. The aquarium has apparently rejuvenated a whole portion of the Durban city centre and beach front—and it is HUGE! Beyond the actual tanks, a whole water park, shopping mall, and several bars and restaurants make you feel much closer to Disneyland than Southern Africa. Still, on a Sunday night the place was almost deserted, and we milled around the underground aquarium without seeing another soul. When we had seen enough sharks to satisfy, we had a few drinks at one of the swanky bars on the beach. The rain was blowing sideways against the windows, but when you are lying on cushions sipping a mojito it is very hard to mind such things.

But comforts are only exceedingly enjoyable in contrast with discomforts, right? Which made the return trip back to Mokhotlong the next morning so very meaningful. We left our hostel around 5:30, and had an easy start to the day as the first combi filled up (they don’t leave until they collect a full 15 passengers) and hurtled on down the road. The second transition—also as smooth as one could hope. As was the third. We started patting each other on the backs—“this is great, we’ll be in Mokhotlong by 1:00pm!” we exulted as we were dropped off in the field that lies between the Lesotho and South African borders. 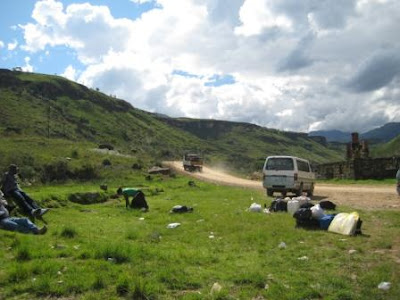 We grabbed some sodas from the roadside stand and settled in to wait until the next combi filled. The woman at the stand said something like, “you want to sign your name?” but I said no, unsure of what she could mean.

An hour later, the field had grown crowded with Basotho toting apparently entire living room sets, and the combi driver started to gather people up. We lined up confidently by the van. Then, the driver started calling out names of people who had clearly already registered for a spot in the combi. Ach! (as the Basotho would say). Still, we were optimistic. And we pretty much continued to be so as we sat for the next three hours in the field. It was only the next two and a half hours when we started to get a little worried. 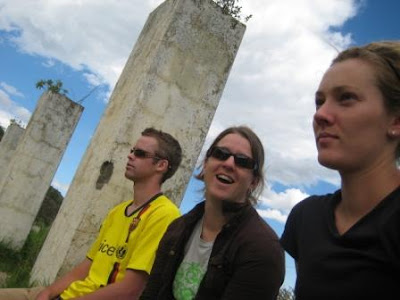 Chilling in a field: Hour Five

But finally around 5:00 pm – a mere seven hours after arriving in said field and after a small car repair and several false starts – seventeen of us squeezed into the car. Unluckily, it seems that people bring more out of South Africa than into it, so beyond the enormous volume of humanity was added hundreds of pounds of suitcases, bags, and apparently 300 blankets. Oh well, we sighed in relief as we finally got underway around 5:30 pm. About 100 yards later we opened the doors to two more men, who had given up on the combi some time earlier and started to walk back to Lesotho. They climbed in gratefully. We tried to compress our bodies even more efficiently to make room. About an hour and a half later they climbed back out, and we exhaled briefly, until a women with two small children took their place, handing one of the babies immediately into Will’s lap.

The rest of the ride, minus the sections where I was utterly certain that all 22 of us were about to plummet toward our deaths as the combi veered crazily down precariously perched winding dirt roads, was fairly uneventful. We arrived safely back at TTL and fell very, very gratefully into our beds.