Hi! Welcome to any readers of this blog! As a lot of you probably already know, Reid and I took off a few months after getting married to spend a year in Mokhotlong, Lesotho, working with Touching Tiny Lives. Here we will try to update about our life in Mokhotlong and about the work being done at TTL. If you are all really lucky, M’e Nthabaleng, the managing director of TTL, might do a few guest posts along the way.

Since this is our first week here, and most readers might not know much about the everyday happenings at TTL, I thought I would write up a pretty detailed account of our first day going on outreach–a major part of TTL’s mission that involves traveling to remote rural areas to contact new potential clients (sick babies and pregnant women) and also TTL babies that have been reintegrated with their families after rehabilitation.

9/16/08
Yesterday was our first day on outreach. After starting to feel relatively adjusted and at home on the TTL compound, we knew that this would once again thrust us out of our comfort zone. We had to abandon our 12 hour sleeping habit (ah, jet lag) in order to make it to the safehouse by 8am for a briefing with M’e Nthabaleng and the outreach workers, Kokonyana and Mamareka.

Our intention was to go to St. Martin (which has a Sesotho name that I do not know–something like Mahoabo) to assess a malnourished child who had been reported by the first outreach attempt in the area. (During this first contact, over 300 people requested HIV-testing. Outreach coordinated with medical workers to provide the tests a few weeks later). Our second task was to contact a pregnant woman who had tested postive and, though we had no drugs for PMTCT (Prevention of Mother-to-Child Transmission), see if we could develop a plan of action.

The ride to St. Martin was…brutal. After the first 30 km or so the road was unpaved, a dirt ribbon winding along the side of the stark mountainside. The outreach workers chatted happily throughout the drive, as I clutched Reid’s arm and prayed that we wouldn’t roll off the cliffs (you 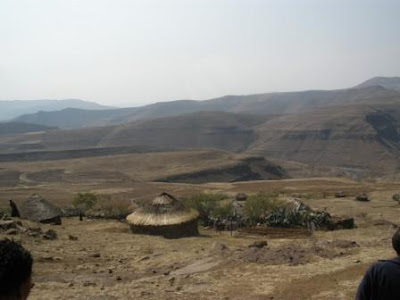 would think a Colorado native would have a better stomach for heights). We arrived at the first village, a windy place with rondavels sprinkled atop a steep hill. The village seemed empty, all the men and children at work and school. The grandmother of the baby we were looking for came to meet us, though for the first 15 minutes or so I did not realize that the chubby faced baby was the malnourished one who had been reported. Then Kokonyana called for the scale, and when the baby was taken out of its wrappings its wrinkled and scrawny legs and evident ribs were finally exposed.

The grandmother was reluctant to give the baby to us because its parents are alive and in Maseru, but Kokoyana convinced her to speak with the grandfather and other relatives and told her we would be back after our stop in the next village (all of this, of course, I am mainly inferring, with some translation from Kokonyana, as our lack of Sesotho prevented us from doing much more than standing by and nodding supportively).

The dirt roads we had been traveling on started to seem luxurious in comparison to the roads that took us from the first village to the second, which seem to consist primarily of large boulders. The Land Cruiser handled these pretty impressively, though I’m sure it would be amusing to watch how its inhabitants were tossed around like rag dolls. Still, my mental state does better with bumps than high speeds and potential free falls, so I can’t say I entirely minded the change.

At the second village we wound our way up a steep path to where the pregnant woman lives. She emerged from her rondaval at the calls of Kokonyana, disheveled and hugely pregnant, with bare feet and a dirty blanket wrapped around her large belly and skinny body. She told Kokonyana that her due date was Sept. 2, making her almost two weeks overdue. Because of this, the outreach workers decided not to bring her back with us to the hospital in Mokhotlong, and to visit in a week or so. Reid and I were somewhat confused at this, and frustrated that there were no drugs to bring to this woman. This goes back to Dan’s well-put point from last year–it is infinitely easier to bring drugs to pregnant women than pregnant women to drugs. As we spoke with her, another woman with a child strapped to her back came by and mentioned that she had tested positive for HIV. She didn’t want to breast-feed, since she knew the risks to her child, but had no formula to substitute. So now there are two priorities for returning to this village in the next few weeks.

After we left this village we bumped our way along to the closest clinic. Here, we heard reports from the clinic staff and its Zimbabwean doctor. The clinic has basically nothing that it needs–no testing kits, no ARVs, no nevirapine, and no formula. After relaying this disheartening news, they told us about a baby they had seen earlier in the day that appeared to be sick and malnourished. One of the girls on staff offered to take us to his village, so she hopped in the car and off we went. This turn of events certainly cemented in my mind the necessity for the outreach program and its widening–so much of this system seems to rely on word-of-mouth and happenstance. 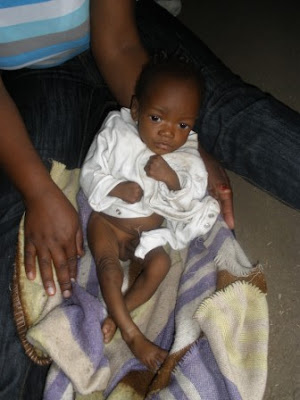 We arrived at the rondaval of the baby, and entered into a very bare room. An elderly man and woman sat within, the woman holding a small bundle. A small, smoking wood-burning stove and a bowl of plain papa sat on the floor next to her, but otherwise there was nearly no sign of any comforts (or necessities, for that matter). Kokonyana spoke with the couple, the grandparents of the child, explaining our mission and how we could help the baby. Mamareka unwrapped the baby, and we could see its shockingly small body. We weighed the baby–3kg (about 6.6 lbs!) at 4.5 months old. The baby, Tholang, had the characteristically sharp face of malnutrition–making him look like a small, wise man. The grandparents were again reluctant to part with the baby, as its mother had departed for the hospital on Sunday. Reid asked Kokonyana to tell them that we could return with updates on the baby’s progress, and, seemingly, this cemented their decision. The grandmother began rooting through a small pile of suitcases and clothing on the floor next to her, and emerged with a new shirt and diaper. She gave them to Mamareka, who began changing and dressing the baby. I still was not sure at this point what the result of our intervention had been, but the next thing I knew we were out of the rondavel, baby and Mamareka leading the small procession. 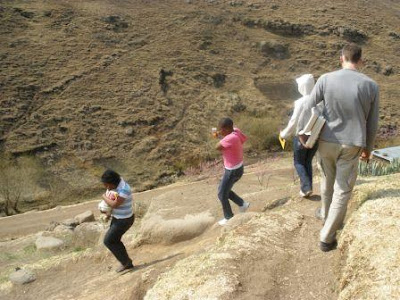 From here we headed back to the first village. Now children played in the yards, still in their school uniforms. We climbed down to the rondavel and were greeted by the grandfather of the child. This rondaval was much cleaner and livelier than where we had found Tholang. Two small boys stood next to chalkboards scrawled with school lessons, and the grandmother sat in the middle changing the baby into a fresh set of clothing. The decision had apparently been made, and she handed us Relebohile almost without discussion, accompanied by a letter from the chief granting TTL guardianship for the immediate future. Relebohile joined us in the now-crowded car, gazing around silently for a while before falling asleep.

Back at TTL, the bo’m’e and outreach workers sprung into action. The babies were washed and changed, and we sent for Dr. Tony, conveniently here this week from Maseru. Dr. Tony showed Reid and I how to evaluate for malnutrition, since if a similar situation occurs after-hours without him here we will have to perform these assessments. Both babies were found to have acute malnutrition–Relebohile slightly more severe than Tholang. Relebohile had been tested for HIV during the previous outreach visit, and was negative, so we tested Tholang. Thankfully, at least according to the initial rapid-test, Tholang is also negative.

After the babies had been taken by the bo’m’e, Reid and I headed home (headed in the quickest sense, as “home” is about 20 feet from the safehouse), mentally and physically exhausted by the day. I can’t really express all of my thoughts and feelings regarding all we saw yesterday–I know that bringing these sick children back to the nurturing environment of TTL seemed like a true victory, but also that the image of Tholang crying silently, so weak that he could barely protest against six strangers handling and examining him, must certainly be the saddest thing I have ever seen. And, of course, for all the celebration accompanying every success story at TTL, the underlying tragedies of orphaned children, starving families, and rampant HIV remain.

Now, three days later, both Tholang and Relebohile are doing well, eating a lot, and already livelier than they were a few days ago.